Are There Bears in the Asheville Area?

Where to Ride: Motorcycling through Asheville & the Blue Ridge Parkway

Hiking the Continental Divide – We were in the News! 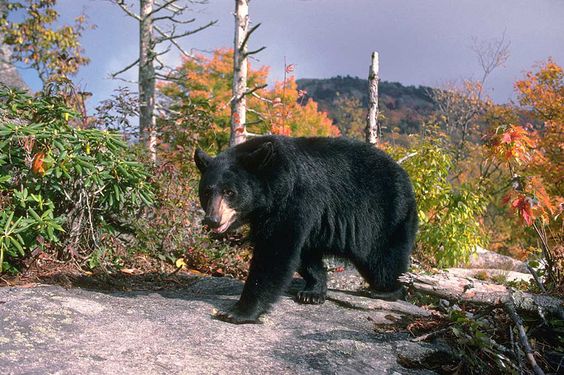 I happen to love black bears and look for them all the time, but lots of people are scared of them or don’t understand them. Let me start by saying a few things: 1. If you are hiking in the Blue Ridge Mountains, I would suggest carrying bear spray – especially if you have any fear or are in the back country 2. Don’t ever feed a bear or get in the way of a bear that is eating. 3. Use bear bags if you are back country camping and never leave food out 4. Mama bears can be the most dangerous. If her cubs are around make sure to not get between her and her cubs. I tend to leave that area swiftly and quietly. [Or watch from a longer distance or even a vehicle]. It is reported that there are over 7,000 Black Bears in Western North Carolina and it is important that, as with all wildlife, we interfere as little as possible.

With all of that being said, Black Bears do not like people – in the sense that when they see humans they move on. Black bears are as scared of you, as you are of them. They typically are shy, quiet and prefer to be as far way from humans as possible. Almost every black bear attack has come from either feeding/food, mama protecting her cubs or instigation.   If you are respectful and keep your distance, your bear encounter should be something to remember and enjoy and not be very long because once they know you are there, they (and you)should be moving along.   They are beautiful creatures and a treat to see.

Most people think black bears are much larger [by appearance and fur] than they actually weigh. An average size black bear in the Eastern US typically weighs 180-200lbs, but can look more like 300 just based on fur, legs, and more. I tell people that if a bear’s back is taller than a 55 gallon drum, it’s probably North of 350-400lbs and that is super rare.

I hear people all the time say they saw a 500lb bear – and although they exist it would be in the top 3%. [That would also be rare based on food sources and more – the larger bears in NC are usually in the eastern part of NC where they have better food sources and easier terrain]

What they typically might be seeing is a 250-300 pounder. Most people also don’t know is that a black bear is quieter than a squirrel moving thru the forest and faster than a dog for the first 40 yards. They climb like cats and eat mostly plants. They love berries during the summer and are on the move [slow] all the time – they cover a huge range. They hibernate during the winter but not very long in this region.

The best place to see bears is in the higher elevations during summer [where it’s cooler] especially along the Blue Ridge Parkway; there have been some sightings closer to town too, so you just never know. Black Bears are not commonly seen, so if you do see one, enjoy the opportunity. And if you do see a black bear, it’s typically not for very long so enjoy the moment!